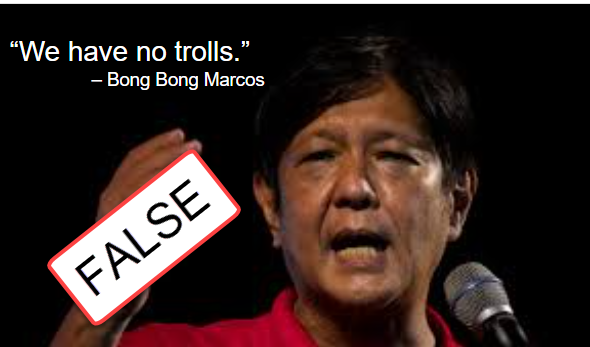 The 2016 Philippine presidential election was one of the first to have been affected by “troll armies”.  Since then, politicians in the Philippines and throughout the world have recognized the benefit of employing troll armies to influence the outcome of elections.

ABS-CBN, a news provider in the Philippines, put it this way: ‘To amplify, avert, attack’: Why online trolls are valuable in election campaigns.

Bong Bong Marcos has claimed multiple times that all his online support is organic. Trolls? ‘Show me one, they don’t exist’ – Marcos Jr.
“Find me one. Show me one. Just one. They don’t exist. You show me the place where there are hundreds of trolls sitting in front of a computer spreading fake news. It doesn’t exist,” Marcos said in an interview with CNN Philippines.

We have found at least a hundred Marcos trolls. To see them and the individual analysis and links to their Facebook profiles, view our interactive BBM troll network report.

Part of this denial may be a misconception that trolls operate in large buildings similar to a call center.  While that does happen, trolls are quite capable of doing their work remotely, and some of the trolls we’ve discovered appear to work remotely and are spread throughout the world. There is also the likelihood that foreign troll “farms” are being used by some candidates, which would make it hard for them to find.

How to Spot A Stealthy Troll

Sometimes fake accounts and trolls are easy to identify. In some of our other investigations we were able to quickly spot obvious fake accounts and obvious troll behavior. Spotting BBM trolls is more difficult, and that may explain his confidence in insisting that there aren’t any.

One of the difficulties in finding trolls is that they are hard to distinguish trolls from “super fans.”  There are ardent fans that follow multiple Bong Bong Marcos Facebook pages and groups, and share and comment on the posts there. For an authentic user, doing authentic social interaction, that activity would be mixed in with other day-to-day social interactions and interests, and would likely be sporadic, rather than appearing to be a full time job.

In our analysis, we’ve looked at sharing and commenting behaviors, and whether we can classify trolls as distribution trolls (sharing from a source page to multiple destination pages), commenting trolls (enhancing the perceived popularity of a post by increasing its comments), and fake accounts dedicated to filling their profile posts with 100% pro-Marcos content.

We include anti-opponent content in the same category with pro-Marcos content.  Very few accounts specialize in only positive or only negative messaging. The negative messaging usually involves insults to Leni Robredo’s intelligence, minimizing her accomplishments, criticizing the behavior of her supporters, accusing her of corruption, and fear mongering about election tampering and what the country would be like under a Robredo presidency. Political cartoons with these themes are commonly shared on pages and accounts that are pro-BBM.

We’ve noticed a targeted effort to “red-tag” Leni Robredo as a communist terrorist. This has grown out of a Duterte-era red-tagging effort overseen by the Strategic Communications Cluster of the NTF ELCAC. The entire troll network is dedicated to attacking Leni Robredo and Maria Ressa, founder of the news site Rappler and winner of the Nobel Peace Prize. We have issued a separate report on this troll network: State Sponsored Red-tagging of Leni Robredo on Facebook.

We recognize that there is a level of this activity that is normal for a Marcos supporter. So, when we identify a troll, we take a wholistic view. We look at the authenticity of the account, any troll-like behaviors of the account, and evidence of coordination with other accounts to spread propaganda.

“Coordinated Inauthentic Behavior” is prohibited on Facebook. Frequently this means fake accounts using automation and acting together on posts as soon as they are posted. It is possible for authentic accounts to participate in coordinated inauthentic behavior. For example a volunteer could use their own Facebook account to perform coordinated troll activities.

Secondly, we look for excessive troll behaviors. Sharing a few posts to your page is normal. Sharing them multiple times in a row, sharing a dozen per day, or sharing hundreds is not. Sharing hundreds of posts to other pages without sharing any to your own is also not normal authentic behavior. Commenting on a post with an authentic opinion expressed in words is normal. Commenting 10 times in a row on the same post is not. Commenting on posts with a propaganda image or a simple phrase like “solid BBM”  or only slightly varied, i.e. “SOLID BBM” can be authentic if not done to excess.

The BBM social media presence is vast and has been created over more than 6 years (it started before his Vice Presidential bid in 2016). Our analysis covers a sample of the BBM-dedicated Facebook pages and groups. It cannot be considered complete. We firmly believe that there are more BBM trolls than those we are exposing here.

Our analysis is based on public information. We did not examine or infiltrate private groups or private posts. This limits our ability to detect overt coordination which may be happening in private groups.  Still, a troll’s job is to make sure people see the propaganda they are in charge of spreading, so not being able to view private activity does not prevent us from identifying trolls. People are able to keep all their Facebook activity private if they choose, and those people are not likely to be trolls.

Today we expose 100 BBM trolls. In our interactive BBM troll network report we list each of the trolls, and provide our analysis on why we identify them as trolls, and a link to their Facebook profile so that you can see for yourself. You don’t need to take our word for it.