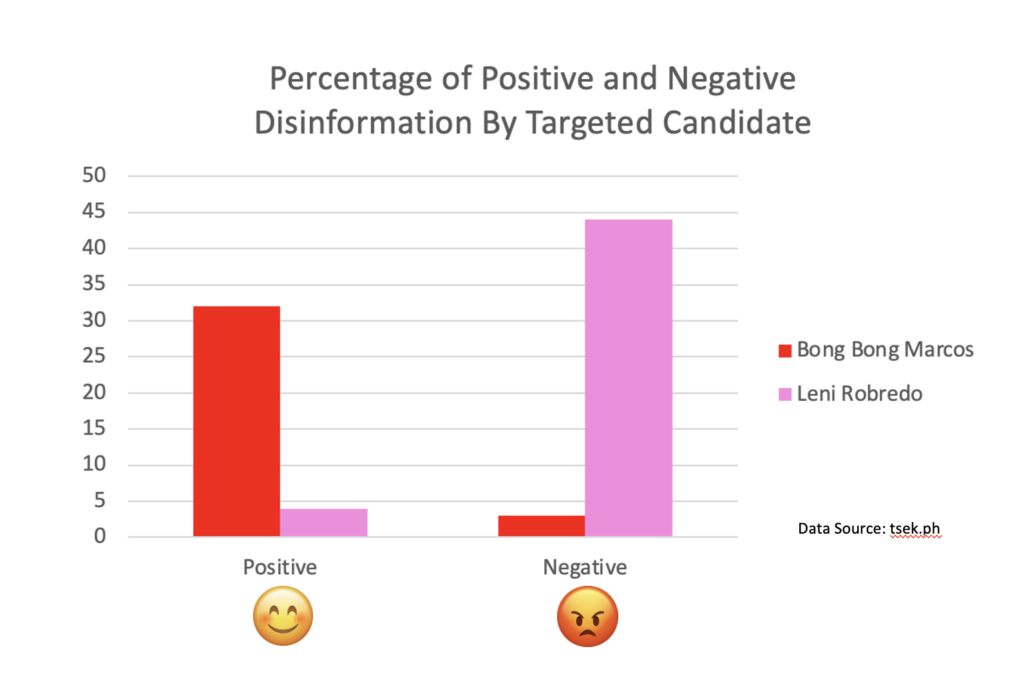 We have documented a vast network of profiles and groups on Facebook who have recently stepped up their red-tagging activity against current Vice President and candidate for President, Leni Robredo. The attacks are blatantly state sponsored and as such are clear violations of the constitution.  Our report reveals exactly which Facebook pages are sourcing the harmful disinformation, which profiles are distributing it, and where it is getting distributed to.

The dynamic graph below  (you can move it around to explore) illustrates the extent of the troll army and how they share the same content back and forth.

Lorraine Badoy, Presidential Communications Undersecretary and National Task Force to End Local Communist Armed Conflict (NTF-ELCAC) Spokesperson, has recently gone public with her allegations that Leni Robredo is a communist.  According to the former Armed Forces of the Philippines (AFP) spokesperson, retired Major General Domingo Tutaan Jr., Lorraine Badoy is in charge of  red-tagging those who criticize the government. President Duterte has recently publicly supported Badoy’s red tagging of the Makabayan bloc.

Badoy’s accusations are politically motivated, not evidence-based. “In all these accusations, no credible evidence was ever presented against the Makabayan bloc, except for innuendos and hearsays coming from perjured witnesses,” said House Deputy Minority Leader and Bayan Muna Rep. Carlos Isagani Zarate.

Badoy  is facing multiple complaints before the Office of the Ombudsman calling for her immediate suspension. “[Badoy] alleges that Vice President Robredo is a supporter of the CPP-NPA, without offering any evidence except for expressions of support from groups belonging to the left side of the political spectrum and her willingness to resume peace talks with rebel groups,” the petitioners said.

“The use of the machinery of state media to disseminate electorally-motivated fake news is a glaring violation of the laws and the Constitution,” the complaint said.

Cavite 7th District Representative Jesus Crispin “Boying” Remulla and Panfilo “Ping” Lacson have joined the red-tagging effort,  spreading rumors that Leni Robredo has  “joined forces with CPP-NPA-NDF” and that she would form “coalition government with the CPP-NPA-NDF.”

In March, Remulla voiced his support for Robredo’s opponent in a Facebook post: “Thank you to our countrymen for the warm welcome to BBM Bongbong Marcos – SARA Mayor Inday Sara Duterte team. #BBMSARA #UniTeam #MulaSaBayanParaSaBayan #BBMSARA2022″ While the BBMSARA supporters cite the Uniteam’s  strategy of clean campaigning as one of the major reasons they support these candidates, it is clear that there is plenty of dirty campaigning going on that targets Robredo and benefits BBMSARA. TAGGED. Since last week, an organized defacing and red-tagging operation targeting the Leni-Kiko and 1Sambayan slates has swept across Baguio City and Benguet province. Photo courtesy of Miah Jebulan

The red-tagging has spread to the streets. On April 21, in the pre-dawn hours, masked men defaced Leni-Kiko tarpaulins throughout Baguio City with the spray painted letters “NPA,” the acronym for the New People’s Army, the armed wing of the Communist Party of the Philippines.

Who Is Doing The Red-Tagging Dirty Work?

As Robredo’s popularity has grown, so has the red-tagging that targets her. We reported a network involved in red-tagging activists in the Philippines in December, 2021.  Since then portions of this network have shifted focus towards influencing the presidential race in the upcoming Philippine General Election on May 9, 2022.

Who Are The Top Trolls Sharing The Red-Tagging Content?

These are the top 6 accounts (profiles and pages) that pick up red tagging content targeting Leni Robredo and shared it, followed by the number of times they have shared it:

The following are the top 5  primary sources ( the pages, profiles, and groups that the content was shared FROM) of the shared red tagging content targeting Leni Robredo, followed by the number of shares of that content from those pages.

How Do These Trolls Spread Their Lies?

The following images illustrate the process that trolls use to infest the social media with their content: 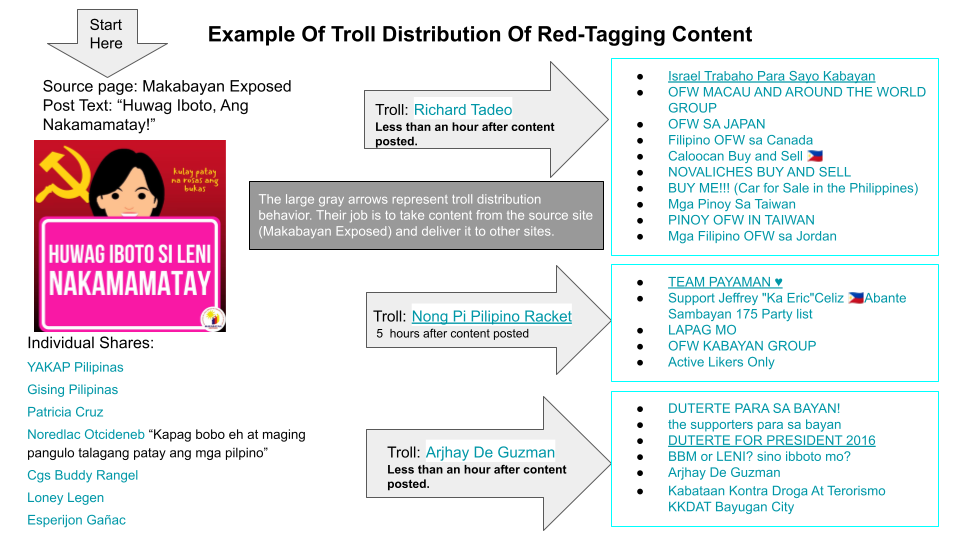 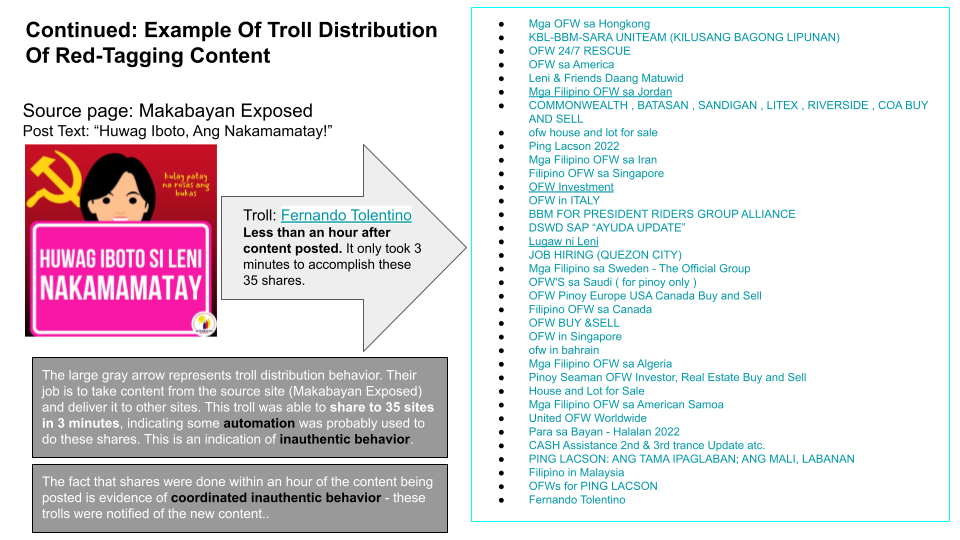 Troll Accounts We Reported That Have Been Shut Down

Download/View our report below to find out exactly which accounts and pages are spreading this dangerous disinformation in a desperate bid to stem the tide of Robredo’s growing support.

Download/View The Summary Report
Download The Spreadsheet Of 1976 Shares